Of Salmon and Spider

“…Why bother worrying? It shortens living. I really do wonder why we all make such a big thing out of so many little things when all we’re doing is preparing to die anyway.”

Seventeen years later, I stand on the bank of the Khutz River in BC and watch salmon surge upstream, trying to hurtle over car sized boulders and flinging themselves against huge torrents of water, failing again and again, trying again and again to manifest their destiny.

Passion for full-on living surges before my eyes, determined to head for their dying in order to regenerate life. Salmon put flesh on the bones of my nascent wisdom expressed so many years earlier. 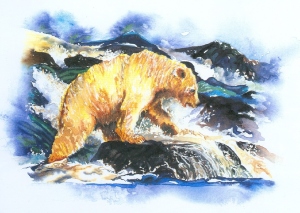 Salmon inspire me. That’s one reason I care about them.

Spiders inspire me, too.

This past week, this web spends two days next to my front door. Spider strategically places it so we humans can walk in and out of the house without running into the primary thread responsible for anchoring the web in space. The second afternoon, a squall moves through. When I look next, the web is no more, evaporated into thin air.

No surprise then, really, that as I sort through boxes of memorabilia yesterday this poem surfaces. This was also written in 1986.

Life’s web
tightens its grip.
I am gasping.
My vision blurs.

Yet in this breathless place,
I need do nothing
but
fight restraints.

I am safe,
no response-abilities.
I stand for nothing,
afraid to be

Falling,
I can do naught but trust.
I see, I breathe, I am.

I ask you, reader, what have you learned from the living world about living your dying?

Deborah Jane Milton, Ph.D. is an artist, mentor, and eco-psychologist, mother of four and grandmother of eight.
View all posts by Deborah →
This entry was posted in truth and tagged dying, living, salmon, spider. Bookmark the permalink.

1 Response to Of Salmon and Spider