My left leg feels frail, aches a little bit, doesn’t move quite right but I CAN put weight on it without excruciating pain. Three days ago, I couldn’t.

I don’t know. After more than five hours at the ER, mostly hanging out in a wheelchair, the doc is mystified. Technology rules out the scarey things like blood clot and fracture. But my lack of other symptoms makes it hard to determine a cause.

So what’s a woman to do?

I retreat to my daughter’s home, bringing my two elder dogs with me. We all lie about, except my daughter, who brings all three of us food and drink when we need it. Walking on crutches isn’t as easy now as it was when I was in college and broke an ankle.

Until this unexpected detour, I’d been painting madly for several months getting ready for an art exhibit that opens in less than three weeks. Despite that time pressure, I decided to leave my painting gear at home and take a break, focus on my much neglected blog and other computer chores while waiting for healing to weave itself through me. And healing I am. I walked without crutches a little bit today and can bend my knee and stretch it out straight without pain, albeit a little stiffly

Our bodies are like tuning forks and I’m well aware that this malady illustrates exactly how I felt last week. My knees wobbled. I felt as if the rug had been yanked out from under me when I got the news.

Apparently healthy, vibrant and vital, Kimberly Davis, 43, died on Monday the 11th of May. Though I never met her in person, she felt like a daughter to me. Online painting colleagues in several classes, we’d also produced the Fearless Sisters’ Oracle Deck together. I reveled in her colorful imagery, applauded the path she unerringly followed as she honored her muse and honed her creative gifts. For three days before my leg gave way, I’d been participating in a commemorative painting vigil with women from around the globe who also loved and admired Kimberly. Her loss and the power of globally sharing love and grief does make me wonder about the timing of my inexplicable leg pain. I know there is a deep connection between my body’s mind and the morphogenic field of empathic, mythpoetic response. So I do wonder about this leg of mine…I do.

Since I’m preparing for an art exhibit called The Many Faces of Gaia, I decide to paint a Gaia for Kimberly as my way to participate in the vigil. Here it is as a work in progress. 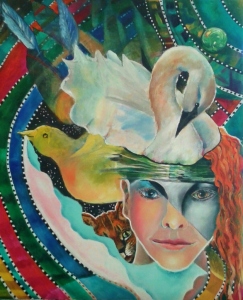 While I paint, I ponder how losing Kimberly has filled many of us with the desire to live more fully, to be bigger and more true to our souls while we still breathe in these bodies. One woman painted for the first time in 18 months. Another painted a larger canvas than ever before – and it was a big one – 30” x 40”. Another woman brought all her images out from hiding. And I re-commit myself to pouring my love for life into painting more evocative and compelling Gaian imagery.

Kimberly’s passing has made each of us more than we were before.

And that makes me wonder how our values would shift if we all remembered our loved ones stand at death’s door, that each breath we take could be our last. Would we love more, play more and fear less, be more willing to change our greed driven priorities so all beings and ecosystems could thrive?

As I paint Gaia for Kimberly – She Who Blesses our Lives Eternally, I ponder the power of death to inspire life and give gratitude for mortality.