The hag cracks my head open with the stone. She slices me vertically from stem to stern, splitting me in two, metaphorically speaking!

The hag says, “Go, go out into the world, but be mindful of the wobbles.”

I don’t feel the least bit wobbly. I lurch a little, to see if I can pretend to be off centered, but that’s the opposite of how I feel so I stop that and walk steadily toward the fiercesome figure who stands before me. She blocks the arbor under which I must pass to enter the ritual space. Garbed in a cloak with an animal skin draped around her shoulders, she holds a drum before her face – a drum painted with the visage of a growling bear.

I suspect I’m in trouble when she asks me something about the pain I must be feeling. 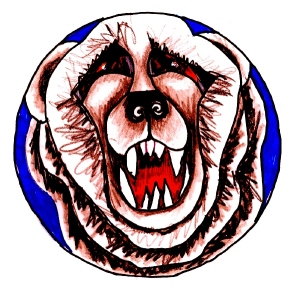 “Go take a walk down that driveway. Return when you’ve considered your answer.”

I start to defend but change my mind and do her bidding. Amanda is heading back from the same walk, hugging her upper body tight and acknowledging me with the barest of nods. At least I’m not the only one who’s been told to take a hike.

But I am annoyed. I know we’re all playing “make-believe” here, but I want it to feel real. How do I stay true to my inner experience and still get through the arbor? As I turn to walk back, I notice that Amanda has made it into the circle. I see Jonathon heading for the mandorla. Oh good, he finally made it past the first gatekeeper. I get close to the bear again. I stand silently waiting. She says, “What is your purpose for coming here?”

“I want to introduce my drum to its drum stick.”

Mmmmmm I ponder…” I want to empower myself to play them together.”

“I’ll, I’ll … I’ll believe in myself…….” I’m fishing here. There’s almost a question in that statement and I know the bear woman hears it.

Her voice gets growlier…”Go deeper, give me something more real than that.”

A slight tremor of deep feeling surfaces. I say with more conviction, “I’m surrendering to this process. I know I’m meant to be here, to play my drum.”

Bear woman softens a wee bit but she’s not done with me yet. She says something like “Think, think more deeply. Surrender…Surrender TO WHAT before you die?”

Her arrow finds its mark in my soul. I plummet. I surrender into acknowledging my desire to fully inhabit my own shoes before I pass out of this world. With a tremor in my voice, I tell her that.

“Ahhhhhh,” she says. “Go forward and remember the power of mouse to help you after you pass me.”

Shit, that reference to mouse almost undoes me. I’ve been mousey too much of my life and I certainly don’t want to go back to being that…Thinking she wants me to be mouselike, I crouch in order to squeeze by her. That’s as far as I’m willing to go.

I stand up and walk the remainder of the path toward the circle. Those ahead of me are already drumming their drums with big smiles on their faces. But I still have two more gatekeepers, one of them an owl, the other a man wearing a red hat . . .

Entering the circle begins another chapter in this story and I won’t share that here.

Tomorrow, though, I’ll share some observations, draw some conclusions. In the meantime, I invite you to consider how this ritual might have affected you and I’d love to hear your comments.

Deborah Jane Milton, Ph.D. is an artist, mentor, and eco-psychologist, mother of four and grandmother of eight.
View all posts by Deborah →
This entry was posted in vagaries and tagged aliveness, authenticity, feeling, meaning. Bookmark the permalink.