David Abram describes some of the qualities of an “oral frame of mind” in his new book, Becoming Animal – An Earthly Cosmology. ( p 269 ) One of them is knowing that. . .the ability of each thing or entity to influence the space around it may be viewed as the expressive power of that being. All things, in this sense, are potentially expressive; all things have the power of speech. Most, of course, do not speak in words…The body, itself, speaks.

We moderns would be so much more comfortable in our skins if we re-claimed this awareness. Let me continue my story about Mishka to illustrate what I mean.

Flash forward 15 years from my last post about the kitten, Mishka. An old guy now, ‘Mishk’ almost lost his life two years before “at the talons” of a giant raptor. His injuries compromise his jumping ability and he moves with a bit more care. He sleeps more during the day, but he is still the nighttime outdoorsman that he has always been.

In the Spring of 2009, I make the huge decision to move from my rural retreat center just north of Missoula, where I have lived for the past ten years of my thirty in Montana. I can’t imagine relocating Mishka, wedded as he is to his homeland. Somehow it seems easier to explain the move to the two dogs, though I don’t remember talking with them about it until later. Nevertheless, Mishka knows two months before our estimated departure.

He brings me a dead mouse. He hasn’t killed anything that I know about in several years. He was never much of a killer, having had little time to practice being a cat before coming to me. What he knows about stalking and pouncing, he’d learned from his step-sister, who’d died a year earlier. Three or four months older than he, she’d been on her own from a very young age and was adept at breaking mice in two by the time she came to me. She was the mouser not he, so his gift of dead mouse is unusual

Two days later on a glaringly bright sunny July day, he prances down the drive carrying a dead vole!

The next day, Mishka is out and about during another hot summer day, not napping on the couch in the cool, dark downstairs as he typically does. 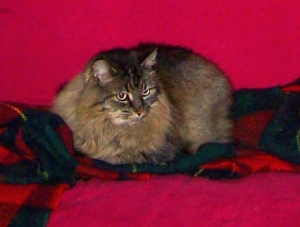 Tail held high and yowling behind his clenched jaw, he brings me a struggling bird.

Several days later, I’m working inside and hear Mishka howling outside. I look out the big picture window bordering the dirt driveway and there he is staring at me… with a shit eating grin on his face. . .I swear. He’s standing with a black tailed squirrel between his front legs.

I go out and say out loud to him, “My golly, Mishka, you’re acting like a teenaged warrior. What’s going on? You sure don’t need me to feed you anymore, do you?” That last sentence feels wyrd, prophetic, an odd thought spilling through from out of nowhere but as soon as I hear it, I know it portends something. I kind of wish the words hadn’t come.

That night, Mishka asks to go out as he almost always does when the dogs are coming in after last pee. The next morning he isn’t on the porch railing waiting to come in for breakfast. At noon, I suddenly remember he hasn’t returned. I know he’s left home. Oddly, I feel relief. I know he’s informed me as clearly as if he’d spoken in my ear. “Hey, ‘Mom,’ I’ve made a decision. I’m staying here in the wild wood. I’m totally capable of feeding myself. I feel younger than I have in years. Don’t worry. It’s all good.”

And I haven’t worried and I haven’t grieved. I miss him, of course. I’m sorry I didn’t get to hug him good-bye as he ventured into the rest of his life without me. But I saw no point in worrying, grieving, or searching for him. He’d told me what he wanted to do.

Deborah Jane Milton, Ph.D. is an artist, mentor, and eco-psychologist, mother of four and grandmother of eight.
View all posts by Deborah →
This entry was posted in mystery and tagged acceptance, grief, loss. Bookmark the permalink.