I know the world is in a perilous state, yet I am happier, more enthused and optimistic, than I have ever been, while being aware of the dark lurking in the light. 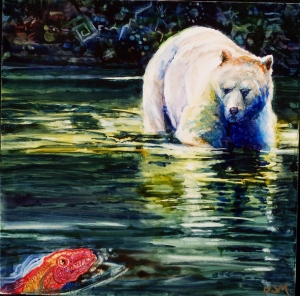 A new friend from the gallery told me about Terry Pratchett but I didn’t follow up his lead.

It took three highschoolers and they aren’t even aware of what they’ve done to me. Unless by chance K, K and J are reading this. Comment here if you are!

Here’s the scoop: I’m getting ready to drive toMontana for my first visit after moving to the Pacific Northwest. My 12 year old granddaughter has accepted my invitation to drive with me, leaving a week earlier than the rest of her family. I know she needs to escape from the last week of school having endured the year from hell. I was delighted to serve as her fairy godmother whisking her away from torment and thought how awesome it would be if I could get some advice, particularly book suggestions, from people close to her own age.

This granddaughter used to be a prodigious reader – consuming Harry Potter books as a young’un and The Twilight series two years ago , so I thought she’d be interested in some good fantasy about jealous mean girls, loves lost, sex, betrayal and mayhem. Kids grow up fast these days in case you haven’t noticed.

So I waltz into the public library on a mission. I must risk entering the glass walled, sound proofed, computer ready, sanctified domain of the adolescent- the YOUNG ADULT ROOM. Luck is with me. Three bookaholics are in there, all young women. They turn to gaze on me. Attentively they listen to my story and then generously offer up a kazillion ideas. Finally they just grab books from the shelves while one of them writes out an additional bibliography. I stagger out with a teetering pile of 11 books and love in my heart for these remarkable young people.

But the 12 year old granddaughter is not interested in the books.

Neither is her10 year old cousin who arrives with her family at the same time we do.

So you guessed it. I start sifting through the pile.

Now this interests me about myself. I hated fantasy, fairytales, especially Grimm’s, as a child growing up in the 40’s. Too many child victims, too many holocausts. Those stories of dark woods, demonic witches, battles and orphaned children, scared me and I was already scared. So I avoided that genre, despite being fascinated by mythology.

The stories we tell ourselves, the stories our culture lives by, these fictions have great psychological import. I have taught courses and workshops on Personal Mythology and benefited greatly from rewriting my own storyline – hence the title of this blog site – BUT I am not a reader of much fantasy – non-fiction mostly and English murder mysteries – but this stack of books I’ve been given sucks me in.

I decide to try my old childhood trick for choosing a book to read. I open up to the same random page – say 58 – in each book, read it, and decide which page 58 hooks me. In the case of the stack it is one by Alison Croggon called The Naming – the First Book of Pellinor. Bards and Treesong and the struggle for a more whole world. Right up my alley but I finish it before the Montana trip is over.

I return to the stack.

Lo and behold, I suddenly recognize the name Terry Pratchett, the one Ed had told me about. I pick it up, sample another page, read the fly leaf and note immediately, this time, the wit. Oh my golly gee whiz, this looks awesome. I consume it. Luckily another first book in a series in which imagination, satire, and outrageous humor reveal deep wisdom applicable to our planetary struggles, cultural foibles and modern psychological pitfalls. WOW.

Today, I mention my new reading habits to another friend in the gallery – here’s the link again in case you missed it above – and she regales me with her own love of the very same books – both Croggon and Pratchett – concluding with this: “You know what Pratchett says don’t you? Never judge a cover by its book.”

Deborah Jane Milton, Ph.D. is an artist, mentor, and eco-psychologist, mother of four and grandmother of eight.
View all posts by Deborah →
This entry was posted in gaialogue, generations and tagged adolescents, books, Croggon, fantasy, myth, power of story, Pratchett, storylines, wisdom. Bookmark the permalink.