Walking Toward the Garden

Yesterday, during a window of respite from the terrible onslaught of what appeared to be fluey-headcoldy-sinuspainy-sleep inducing illness, I met a few friends for a Matinee that Matters, a wonder-filled opportunity to see thought provoking films at an historic movie theatre. This simple concept could be implemented in any town which wants to educate and inspire its citizenry about our planetary culture. In many cases, the films are accompanied by the filmmakers who host lively Q & A afterward.

Yesterday’s wonder was Back to the Garden. Kevin Tomlinson, the filmmaker, remembered the hippies of the 1960’s and in 1988 became curious about what had happened to them. By chance, – or was it serendipity, synchronicity, Eairth doing her work, – he spotted a poster for a healing gathering in rural Washington. Camera in hand, he arrived on the scene and interviewed numerous men and women and filmed the love-in, circle dancing/drumming/chanting scene. But he shelved the film, thinking it was a cliche and would not serve the message of love, simplicity and back to earth honoring ethics during the conservative era of the late ‘80’s.

Now twenty years later, he realizes that the planetary perils we’re facing have made green a popular brand and sustainability a buzz word. He wondered what had happened to those hippies as they’d aged. He found most of them and their poignant stories captivated me as the film unfolded. One of the things I observed was their vibrancy – strong bodies and bright eyes, one mum looking like the older sister of her daughter – and without make-up! Integrity and grit shone. I admired them and their commitment to a lifestyle of simplicity and embeddedness with the earth where they lived.

Tomlinson says, “. . .I wanted to broaden the definition ( of hippie ) and show the reality of strong, responsible, dedicated, human beings who are giving back to their communities as teachers, farmers, political activists, and stewards of the earth.

“There’s a thread about money and the notion that having wealth doesn’t really mean just material wealth. Given our economic struggles, I think having the conversation about living on less and still finding fulfillment while providing for our families will find an audience.” 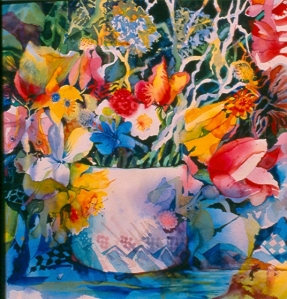 Thanks to the internet and blogging, I’m discovering lots of cohorts out there who are recognizing the joy of living simply. You don’t need to live “on the land” to change priorities. My friend, Alisa’s blog, AugustLake, for instance has just been featured on another writer’s blog who lives in England in the heart of an urban village.  Click right here to access Miss Minimalist. Look for post September 29 to read about Alisa.

Ironically, what used to be an iconoclastic movement may now become mainstream as more of us turn around at the cliff’s edge of over-consumption and corporatocracy to discover new paths to walk toward life more richly lived.

Deborah Jane Milton, Ph.D. is an artist, mentor, and eco-psychologist, mother of four and grandmother of eight.
View all posts by Deborah →
This entry was posted in truth and tagged choice, freedom, turning around. Bookmark the permalink.

4 Responses to Walking Toward the Garden