Gaia has been a word in my vocabulary ever since James Lovelock first proposed his theories in the late 1970’s. Gaian theories made perfect sense to me then and they still do. They match my observations of the world around me. Our planet – Gaia – is a self-regulating series of vital interlocking systems of which we humans are only one. Unfortunately for Gaia as a whole, humans are a bent spoke in the wheel … capable of throwing all the other systems out of balance.

In ancient Greece, Gaia was considered a “primeval prophetess” offering wisdom to humans who would/could listen deeply. The expression, “keep your ear to the ground”, originated then and now still identifies the source of my true knowing.

We are a young species on this planet, even though by some accounts we arrived as long ago as 5 million years. The planet, however, is thought by scientists to be at least 13.7 billion years old. To get a sense of those time frames, imagine your arms stretched wide to either side. The tip of the little finger on one hand represents the planet’s birth while the white finger nail tip on the little finger of the other hand represents the length of time we’ve been here. That’s it! The tip of a finger nail…

We humans are still babies,…I’ll give us a break here, maybe we’re toddlers,… in comparison to the maturation of other species . But imagine toddlers. They’re hell bent on poking and prodding, tasting and squeezing, ripping and tearing. Everything that lies in their path is consumable. More is better. Mine, mine, mine and NO!

All toddlers grow-up, but do not necessarily become mature adults. But at least we have the capacity. When we grow-up, we have the capacity to acknowledge the rapid rate of change on our planet, to question the source of happiness, to behave with decency and wisdom because we love life, our own and those of our families, friends, and co-inhabitants of this planet.

So what does Painting Gaia have to do with these musings?

A few months ago, my friend Trebbe Johnson of Radical Joy for Hard Times  was musing about the need for new images of the human relationship to the earth. The image of earthrise as seen from the moon illustrates the globe’s fragility but does little to inspire human caring for the planet. Other images, beautiful though they are, often show the planet being held in a human hand and though that’s true – the planet’s natural systems ARE in our hands – a hand held earth may also obscure a sacred truth. We are dependent on the planet in a way that the planet is NOT dependent on us.

Trebbe’s thoughts inspired me, so when I stumbled upon Jassy Watson Artist  who offers an online course called Painting Gaia, I knew I had to dive in. And though I have not completely avoided those images of the planet being cradled by a human form,

I am devoted to painting Gaia because I’m learning that Gaia is more than this planet alone. I am learning to listen, listen, listen to the vastness of the entire panoply – from our origins 13. 7 billion years ago to who and what we are today. And we do that by painting in layers…beginning with the portal, the birth canal, the threshold over which all new life has to step…. 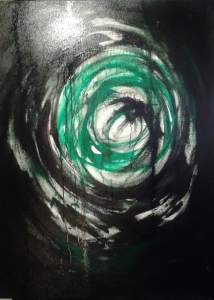