The words below belong to my friend, Jaems, a Druid priest in CA. He replied to my recent post: Words or No  Words. Eloquent, his story, with words of course, which is partly why this is all so funny to me, so paradoxical, but so richly textured and evocative of the indigenous human territory I’m pursuing in this blog.  That’s one reason I’ve used it as my post today…I’m also still wonky from my headslitherygoopiness.

I took a walk in the redwood grove which had been used as the forest for the last of the three Star Wars movies (the Ewok movie)–do you remember the “air bikes” chase scene, the heroes zipping through the trees and enemies crashing into them?–that’s the forest and those are the trees.  The grove lies within a horseshoe bend of the river and is bordered by Hwy 36 that begins near the Northern California coast, winds through the mountains and ends at Red Bluff in the Central Valley.  The grove is cool and quiet.  After walking a bit, even the sound of the passing vehicles is absorbed by the forest and disappears.  In this place, you walk with redwoods.

This is unmistakably their home.  The silence begins to feel–not simply a condition for hearing them, but–as a necessary part of the ordinary conversation between them and me.  Suddenly you get it that they have been talking with each other for much longer than your own life, and you are stepping into their speech and they are reaching out to you and including you.  The silence becomes a substance, a tangible “goop” which, much like an experiment in a chem lab, holds everything in suspension and which facilitates flow of energy.  I walk through “something.”  Soon I realize it’s a visceral communication made up of smells, breath, memories on the forest floor, vines of poison oak leaves turning red, and and something else.  The trees are reaching out, just as I relax and open to them.  No longer am I talking to trees and having ecological consciousness of biodiversity; instead, we are in active dialogue with each other.  I have entered an ancient discussion.  There is a headymixture of delight,  yearning, sorrow, a feeling for being totally right here and stories going back and forth between us.

Truly, the entire experience seems simply normal.  As I come back to the edge of their home, I feel the air change.  The hot air along the river is filtering in.  All of us know this and are changed by it–the trees, the short brush, even the air itself.  It’s all an active dialogue–and I mean “Dialogue” as a comprehensive sense of everything exchanged, felt and known.  As I step out into the sunlight and the sandy bank of the river, suddenly a grasshopper flies away and ratchets its legs in protest.   And just as suddenly I understand that the earth is a living deity, within which we are intimate and integrated, and everything is her expression.  We are in constant Dialogue, because she is always speaking, reflecting upon her being in sound, colors, flight, air temperature, absorption, song, darkness, death and spirits.  Too too much to say in this short space, but she is also the Imagination in the air that continues to reflect upon this in these words.  The flow is visceral, andit is visual.  Sometimes we actually see it with our eyes, a vision of the flow itself, or even the movement along the flow in the flight of a grasshopper.  If we ask, we can see it, because she shows it to herself.  She says a word and it is.

Just as suddenly, I realize that for most of the people I know, this dialogical ability has been diminished to the point of being lost.  Instead of visceral dialogue with her,  the normal and general sensory capacities (for this ordinary kind of communication) have become exceptional and specialized.     The ordinary is not, however, the controlled and heavily manipulated language of Medicare, capitalistic corporations or a culture founded upon fear.  But that discussion goes in another direction.

Dialogue that precedes finding words for it is an ordinary way of life.  Take a walk in the woods.  Step into the goopy suspension within which you will feel the flow moving through all things (very much like electricity moving easily through water), and listen.  And once you know it, you can walk with it always.  Now, then, tomorrow, here, sleeping, over coffee, in the mist. 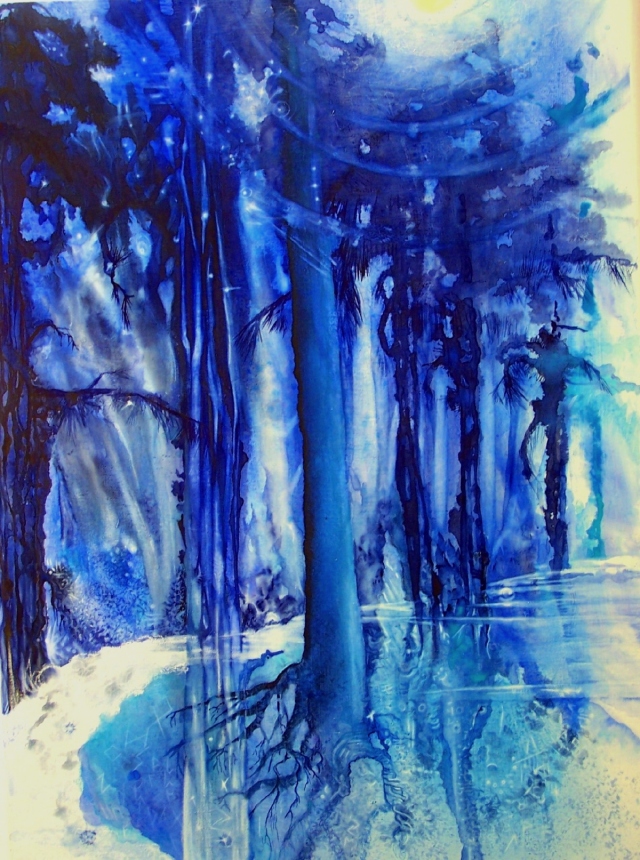 Hence, when people say that they listen to spirit, when people say they are taught by spirit,  when people sing songs given to them by spirit or when they are moved to say or do something in spirit, it’s just that they step sideways into the visceral dialogue of life.  The spirit(s) are right here.
It’s a beginning to reconnect with knowing this–what you call “reMembering”.  From there, you can travel on the energy.  And there’s more.  But enough for now.  But when you bring back images and paint them, you tell others about the journey.  I mean, you personally, Deborah.  What a gift.

Like the guy who says to you, Yes, that’s where I was.  I have on my living room wall a painting by a friend who has been at edge of the great transformation.  She was, in fact, painting that journey when she suddenly collapsed and was found the next day.  She was brought back in the hospital, but I refuse to put a frame around that painting, because there is one place of white canvas.  It’s when she collapsed.  It’s part of the story.  But she knows, and, this painting still unfinished, she is already working on another.  She is in constant dialogue with the spirit world, and she is showing us.  As you are.  As we could all be more and more.  How more fortunate could we all be?  Most people don’t know yet.

Deborah Jane Milton, Ph.D. is an artist, mentor, and eco-psychologist, mother of four and grandmother of eight.
View all posts by Deborah →
This entry was posted in gaialogue and tagged ecstasy, polyphony, reality, truth, wonder. Bookmark the permalink.